Why is the Sky Purple?

Of course, the more usual question is "why is the sky blue?", but Peter, an ex-pat schoolmate of mine living in India, snapped the image below of a beautiful and very purple Chennai sunset. He called upon me, by name*, to answer the question of why the sky appeared so purple at that time. Who am I to deny a friend in need?

I'll answer the question in good time, but we have to do a couple of other things beforehand. First of all, we must look at the picture that Peter took and say "oooooh..." in honour of it's prettiness:

Secondly, it would help to have a basic understanding of the answer to the question...


Why is the sky (usually) blue?

Light is one of those forms of radiation that travels in waves. Different types of radiation have different wavelengths, and light is no exception to this rule: red light has a relatively long wavelength, shortening as we go through the spectrum (remember ROY G BIV?) to get to violet.

Molecules in the gas that makes up our atmosphere absorb light that hits them and then re-emit it in different directions. This is known as 'Rayleigh scattering', named after the bloke who discovered it. One thing that Rayleigh discovered is that light with shorter wavelengths, i.e. towards the violet end of the spectrum, gets scattered more easily than light with longer wavelengths (towards the red end of things).

The light emitted by the Sun (which is our chief source of light here on Earth) is white light, which of course means that it's made up of colours from the entire visible spectrum. When it enters the atmosphere, the bluey-indigoey-violety light is scattered by the gas, and the reddy-orangey-yellowy light just ploughs through relatively unimpeded. This is why the sky appears to be blue most of the time, and is incidentally why the sun, when looked at (DON'T look at it directly unless you don't want your retinas any more) appears a sort of yellowy colour, rather than white.

O.k, I think we know enough to get onto the question at hand...


Why was Peter's Chennai sunset purple?

In the evening, when the Sun is low in the sky, its light has more atmosphere to get through before it reaches you, and so the effect described above is more pronounced. In fact, more of the orangey-yellowy light gets scattered on this extended journey, meaning that the sun appears redder than it usually does higher up in the sky.

This red light, low down in the sky, given the right conditions, can reflect off aerosols high in the atmosphere. The resultant red glow mixes with the scattered blue light, creating beautiful purple sunsets just like the one in Peter's photograph.


Is it caused by pollution?

Aerosols get a bad rap, due to media hype in the late 80s and early 90s about spray cans that utilised aerosols and caused a fair amount of pollution. An aerosol is simply a collection of fine particles (either solid particles or droplets of liquid) suspended in a gas. One example is smog, which is soot particles suspended in the air. Another, more natural example would be clouds.

Aerosols can be naturally occurring or anthropogenic in nature. Thus, the effect described in this post may have been produced as a result of pollution, but it may just as well have been the result of natural conditions.

If you were in space and looked at the Sun (DON'T do that. Not even when you're on Earth.), it'd look white. When you're on Earth and you look at the Sun (DON'T. Seriously, you risk going blind if you do.), it looks yellow, or sometimes red, due to effects described earlier in this post. Something's 'colour' isn't so easy to define as you might think. Honestly, if you asked nicely enough, I could give you a pretty convincing argument that the Sun is actually green.

* Which I was chuffed to bits about.
Email Post
Labels: atmosphere earth

Are some stars bigger than the Earth? 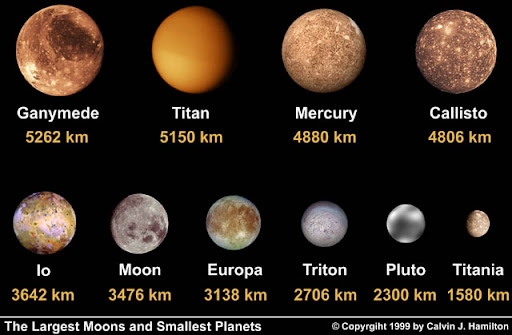 Why is Earth's moon so much bigger than all the rest?